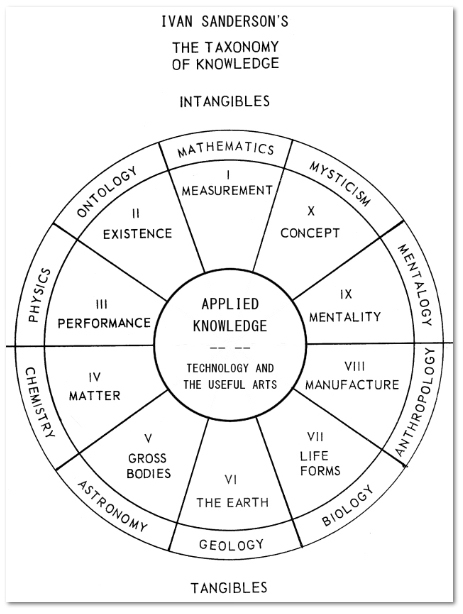 Editor. “Editorial.” Pursuit: Journal of The Society For The Investigation Of The Unexplained 2, no. 3 (July 1969).

...has something to do with aliens?

Back in the late 1960s, a long-gone friend of mine, the naturalist and media personality Ivan T. Sanderson (1911–1973), had a fair-sized “Annex Building” on his estate in northern New Jersey that housed his library and collection of curiosities he had collected from around the world. Instead of using the Dewey decimal system or the Library of Congress system to organize his library, he devised his own “Taxonomy of Knowledge,” which took the form of ten principal departments of organized knowledge. Five of these he called “The Intangibles:” Mentalogy (psychology, ethics, aesthetics), Mysticism, Mathematics, Ontology (space, time, locus, cosmology), and Physics. The other five areas of knowledge were “The Tangibles:” Chemistry, Astronomy, Geology, Biology and Anthropology. He arranged these departments in a circular diagram, where an eleventh area, Technologies and the Useful Arts, sat at the center, having access to any or all of the ten major departments of organized knowledge (see illustration).